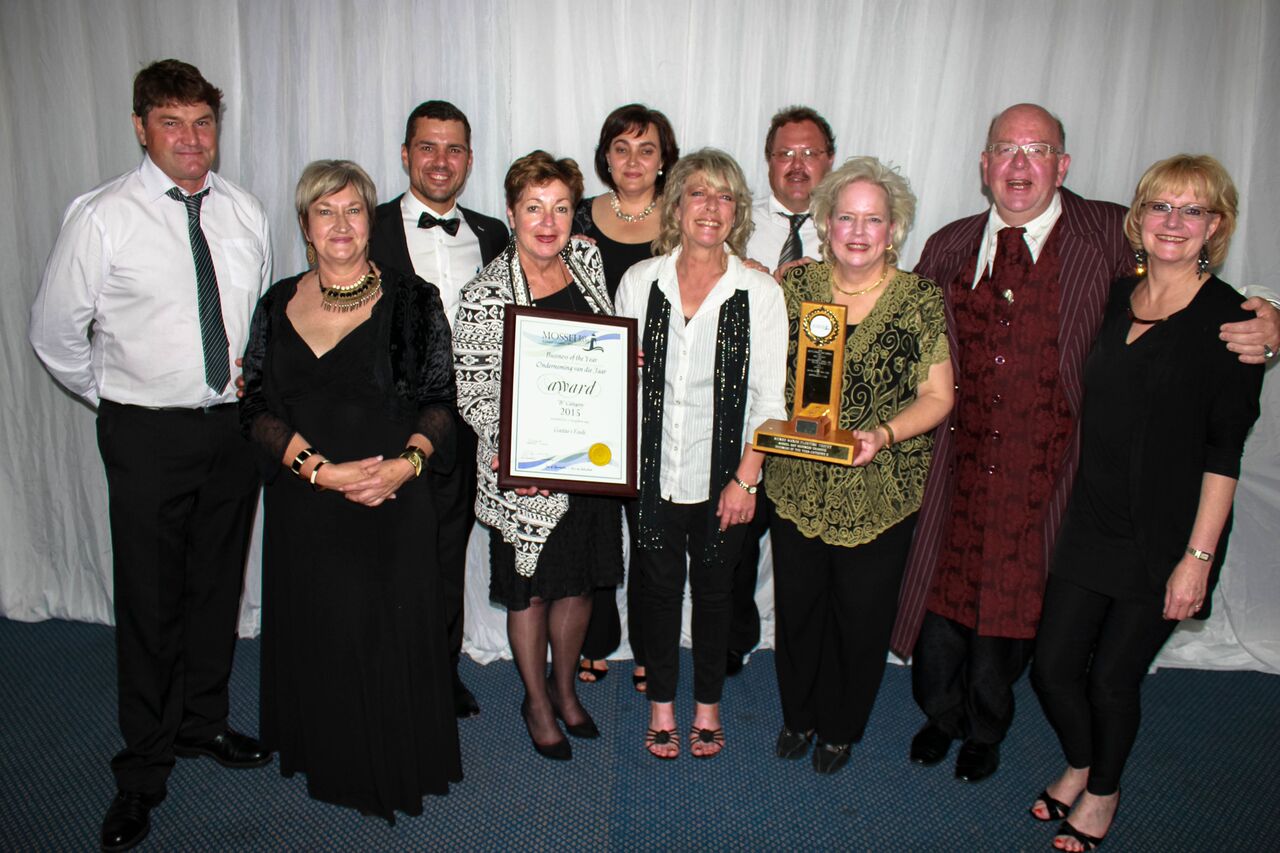 Congratulations to our Business of the Year winners! 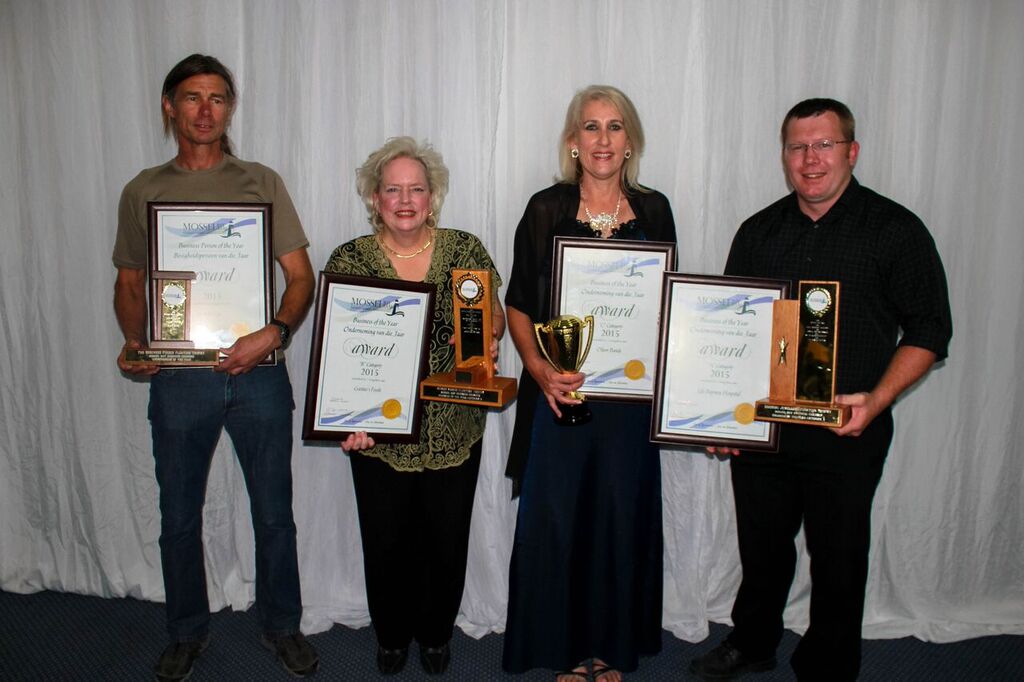 The following speech was delivered at the year end function.

Mossel Bay occupies a unique place on the South African Garden Route and has enjoyed a number of advantages since long before its establishment as a town in 1848.

After Bartholomew Dias landed in the bay of St Blaize, or Aquada de Sào Bras, the town was developed as an export harbour for wool, ochre and ostrich feathers. Currently, pleasure boats from across the globe regularly dock in the harbour. Other international seafarers also use the modern port facilities. From this it can be seen that Mossel Bay has a long maritime history.

Importantly, in 1601, Paulus van Caerden renamed the town Mossel Bay as he found that mussels that were found here were a welcome addition to the diets of his crew. Today, the mussels gathered in Mossel Bay every spring are rated as among the finest in the world. This is something that the town can be very proud of.

From a leisure and tourism perspective Mossel Bay offers surfing, deep sea fishing, whale watching and sailing to mention a few of available activities. Blue flag beaches add to the allure of the town as does the fact that its location on the world renowned South African Garden route which attracts visitors from far and wide.

It is therefore not surprising that Mossel Bay wants to participate in Operation Phakisa with the anticipation that this will bring prosperity to the town together with the outcomes of job creation, improvements in equality and reduction of poverty.

In order to determine how Mossel Bay can benefit it is important to unpack what government anticipates the results of Operation Phakisa will be. The two main projects of Phakisa are the development of the ocean economy and health. Being a coastal town it is logical that Mossel Bay would want to hone in on the ocean economy.

But what in fact, is Phakisa? In August 2013 President Jacob Zuma undertook a State Visit to Malaysia. He was introduced to the Big Fast Methodology through which the Malaysia government achieved significant government and economic transformation within a very short time. Using this approach, they addressed national key priority areas such as poverty, crime and unemployment. It is interesting to note that our BBBEE process is also based on the Malaysian model.

With the support of the Malaysian government, the Big Fast Results approach was adapted to the South African context. To highlight the urgency of delivery the approach in South Africa was called Operation Phakisa.

A study on the ocean economy carried out by the Nelson Mandela Metropolitan University showed that the oceans around South Africa had the potential to contribute R54 billion to GDP with the creation of an estimated 316 000 jobs. A 2013 analysis found that nine sectors of South Africa’s ocean economy could generate an estimated GDP contribution of R129 to R177 billion by 2033 and double the number of jobs initially predicted.

And so Operation Phakisa represents a new spirit of moving faster in meeting government’s targets. The starting point for government was that South Africa is surrounded by vast ocean, an untapped resource with immense potential to contribute to economic growth and the addressing of the three imperatives of job creation, poverty reduction and lowering of inequality, which the country has not taken advantage of.

In the ocean economy, Government has identified four critical areas to explore and unlock the potential of South Africa’s vast coast line.

The first area is marine transport and manufacturing. Despite having large ports such as Durban, Richards Bay and Cape Town and a new port at Coega, South Africa there are no ships on the South African register. This is despite the fact that each year 300 million tons of cargo moves through our ports in the form of imports and exports. In addition, 1,2 million tonnes of liquid fuels move along the coast. Rapidly expanding offshore oil and gas activities require a supporting fleet of vessels.

South Africa is ideally positioned to serve the East-West cargo traffic and the booming offshore oil and gas industry through marine manufacturing which includes ship and rig repair, refurbishment and boatbuilding. Despite this competitive advantage South Africa only captures only 1% of the global repair and refurbishment market. Of the 80 oil rigs estimated to be in range of the Western Cape only four are serviced per year. There is thus significant potential for growth in this area. Mossel Bay has an advantage in that it already has an active harbour that caters for service craft for the oil industry, which began with Mossgas in the late 1980s.  Regrettably there is not much other commercial activity and there has not been any other sizeable growth. Mossel Bay can take advantage of initiatives across three categories identified for this leg of Operation Phakisa, namely infrastructure and operations, skills and capacity building and market growth. But Mossel Bay has the infrastructure to contribute to increasing local manufacturing capacity through a 10% increase in the use of local components for boat and ship building. The dedicated occupational team for the sector that will be created within the Department of Higher Education and Training to drive alignment between theoretical and workplace learning will be an essential partner in this regard.

And so what if Mossel Bay may not be able to service large vessels, smaller craft also have need of these facilities. Mossel Bay could position itself as the mecca of small vessels and leisure craft. The fishing industry provides an important economic boost to the Southern Cape and the local community, as has done the oil industry. Mossel Bay could therefore focus on fishing boats and ocean going yachts where the private sector can play a meaningful role.

However, PetroSA has fired a warning shot across the bows of this potential benefit – last month it said that its flagship Mossel Bay gas-to-liquid plant could run out of local gas supplies by 2017 after an offshore drilling campaign yielded only 10% of the expected reserves. The R1 billion offshore drilling campaign along South Africa’s southern coast which, completed 3 out of 5 well before being stopped, only realised 25 billion cubic feet of a projected 242 billion cubic feet of gas that could be commercially extracted. It had been anticipated previously that the life of  PetroSA’s operations would be extended but currently the plant, one of the world’s largest is operating at 45 000 barrels per day of oil equivalent – only half its capacity – due to dwindling reserves. This is a worrying development as it could mean that the activities of the Mossel Bay harbour could be reduced.

But on the flip side, PetroSA also said that they were currently processing 11 000 barrels per day of condensate, but they had a project to increase this to 18 000 barrels a day in 2016 with the potential to increase it further in stages to 25 000 per day. Condensate from countries such as Algeria, Australia and Norway would be sourced for this purpose.  This would double the current level of operations. This holds potential that the Phakisa oil and gas project, although not linked to exploration, will continue to provide Mossel Bay with a foothold in the development of the ocean economy, potentially stronger than it presently enjoys.

The third stream concerns aquaculture. This stream underlines the high growth potential of South Africa’s aquaculture sector due to an increasing demand for fish and sea products. Currently aquaculture provides almost half of the global fish supply, but only 1% of South Africa’s supply. This sector offers significant potential for the growth of small business and job creation. The project has the potential to grow revenue from the current R0,5 billion to R1,4 billion by 2019.

Already results are being achieved in this initiative. A local aquaculture farm in Hamburg in the Eastern Cape recently harvested its first crop of approximately 260 dusky kob fish or kabeljoe as it is commonly known. The project is driven by the Department of Agriculture, Forestry and Fisheries and employs 21 people from the local community.

The first batch of fish was introduced into the system in February this year and within 7 to 8 months had reached market size, ready for sale. The weight of the catch was 277kg with an average fish weight of 1,1kg.

The farm is located approximately 60 km from East London, is a two hectare site with the capacity to produce 20 tons of dusky kob per year.

Government recognises the need to create an enabling environment for aquaculture which will include the establishment of an Inter-Departmental Authorisations Committee to co-ordinate aquaculture applications and approvals.

Other initiatives focus on funding support, increasing the skills pool and awareness of and improving access to markets

The Department of Agriculture, Forestry and Fisheries invites applications to register aquaculture projects, which may be submitted at any time. Evaluations for inclusion will be done quarterly.

Mossel Bay is in an excellent position to benefit from this stream. Mussels from Mossel Bay already enjoy recognition as among the best in the world. Mussel and oyster farms could provide a meaningful means of participating in Operation Phakisa and they also have the potential to create a large number of jobs

The final area is marine protection services and ocean governance. Government considered the fact that the economic zone over which South Africa has jurisdiction is an area in excess of 1,5 million square kilometres over which effective governance is critical. The project plan entails the protection of the ocean environment from illegal activities and to promote its multiple socio-economic benefits with results by 2017. A Marine Spatial Planning Framework will be developed by December 2015. A draft Oceans Bill also needs to be interrogated. The Act should provide a clear foundation for marine spatial planning. The role of the private sector remains to be seen. SACCI will be considered in depth and we will comment on it. SACCI will ensure that the legislation identifies a clear role that the private sector can play in this important area as well as the role that towns such as Mossel Bay can play in keeping the South African coastline safe.

But there has been no indication that tourism wll find a place in the oceans economy. This needs to be seriously considered as it has the potential to increase GDP by significant levels. Mossel Bay is in a prime situation to exploit ocean tourism in its multiple forms.

And so, will it be possible for Mossel Bay to participate in and reap the benefits of Operation Phakisa as it relates to the ocean economy? The answer is definitely yes. But the niches in each of the areas focused on will have to be identified. Business, Labour and Government all have a role to play in order to ensure that success take place.

From a business perspective there is no better organisation that the chamber of commerce to bring the three parties together and to facilitate action.

But a key requirement is for Government to provide the enabling environment. Government must also provide business and labour with detailed information on their objectives and anticipated outcomes. On the other hand, if business is to participate in a meaningful way, it must tell government what it needs.

SACCI wishes you great success in all your efforts and will be watching your progress with great interest, trusting that we can learn from you so that experience and lessons can be passed on to other coastal towns that have aspirations of participating in Operation Phakisa.