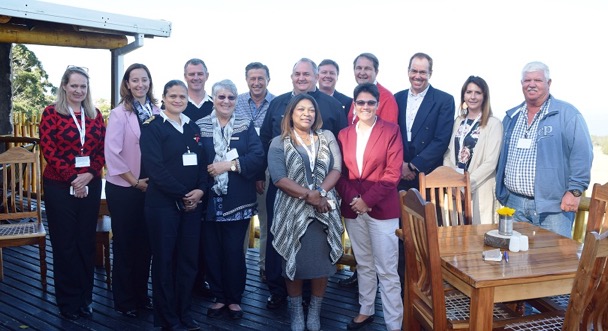 An economic injection of note awaits the Southern Cape and Klein Karoo if the George airport and Mossel Bay harbour get their act together and start exporting local produce on a grand scale. 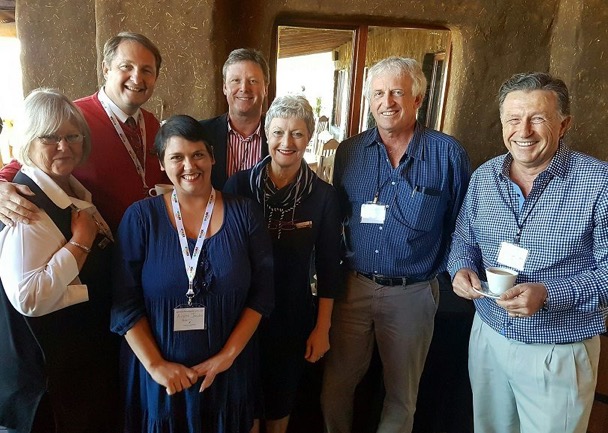 Both facilities are at present not optimally utilised for either exports or imports.

This was the message that emerged at the workshop held last week at Down To Earth Herold’s Bay. The workshop was initiated and facilitated by Fanus Truter of the Mossel Bay Business Chamber in conjunction with ACSA and George airport, Transnet and the Mossel Bay municipality.

Direct exports of especially perishables from both these key facilities can lead to an unsurpassed growth in the region. The desirability and viability of direct exports came under the loop at

Both facilities are established. However, the logistics and affordability of their services as well as the reach of the possible export of products still need to be determined and put into place.

“The two ports offer significantly different products based on the volumes of product that can be handled and times involved in getting the goods between supplier and user.  I see a positive working relationship going forward between the two entities. In terms of development of a possible SEZ (Specialised Economic Zone) it would be best motivated with the support of both the Mossel Bay Harbour as well as George Airport, and hence there will be a need to collaborate in future,” according to Brenda Vorster, manager of George airport.

The idea behind the workshop to get the powers to be of Transnet and ACSA together to discuss exports from the region was born four years ago when PetroSA was scaling down and a large number of employees were paid off. One of Fanus Truter’s, the then chairman of the Mossel Bay Business Chamber, clients was worried because he could not get any information out of PetroSA regarding the retrenchments. PetroSA was one of the largest employees in Mossel Bay as well as the main client of Transnet. Truter was worried that Mossel Bay could turn into a ghost town and decided to organise a conference where the decision makers of local as well as national businesses could share their future plans for the town.
After the first four speakers at the conference it was clear that the economy of Mossel Bay was well, but there were serious worries about the underutilisation of the harbour.
A second conference was organised by the Chamber for November 2017. Delegates from agricultural societies, tourism and chambers within a radius of 280km from Mossel Bay were invited to share their towns’ best practices and to discuss ways of pooling the assets of the region. At this conference a representative from the Kamanassie district raised the question of exporting their figs directly from George airport.
Truter then saw the opportunity to bring ACSA and Transnet together to discuss ways of jacking up the export business.

A group of nearly 50 delegates attended the workshop on Thursday. These included four export agents, agricultural role players, representatives of Oudtshoorn, George and Stilbaai Chambers, Mossel Bay councillors and deputy mayor, representatives of Transnet (harbour) including the harbour captain Vania Cloete and a strong team from ACSA including the airport manager, Brenda Vorster.
Positive input was received from representatives from businesses that are already doing exports as well as from farmers who have started planting crops with the option to export. The marketer for figs from the Kamanassie region, Danèl van Deventer, said that at present they export 100 tons of figs over a t present the figs are being transported by road to Port Elizabeth and then transferred to a ship for international export.
Representatives from Berryworld SA said that they export 1 400 tons and that they would definitely make use of the George airport and Mossel Bay harbour if it was cost effective.

The Senior Specialist: Cargo at ACSA, Nina Engelbrecht-Malherbe, said that the George airport has been exporting produce for some time. Most of the transport is by passenger liners. The George airport can export your goods via Cape Town, Durban and Johannesburg within 24 hours to 156 destinations worldwide, this includes Africa.

According to Engelbrecht-Malherbe the role of ACSA in the air cargo supply chain is to ensure that the necessary services and supporting infrastructure are available for efficient, safe and beneficial use by the stakeholders.  These stakeholders should be able to derive value from making use of the Airport as a host of its facilities.

“It is then essential that ACSA understand the markets being served and actively engage with the users of our facilities to be able to address their needs, and thereby assist in ensuring the sustainable growth of the entities on and around the airport. By understanding the requirements, and addressing the needs of the users, the flow of goods becomes more efficient, cost-effective and ultimately more attractive to the markets” she added.

André Vermeulen, Group Executive: Airport Management said that renovations and extensions need to be made to the existing facility at George to accommodate the need to move cargo. According to him there is some funds available as soon as a comprehensive needs analysis re cargo volumes and frequency have been established. Technical solutions regarding the infrastructure at the airport and harbour need to be discussed and a cost analysis re air, road and sea transport need to be done.

The Mossel Bay harbour that has been greatly dependant on the activities of PetroSA is also geared to move into the next phase and focus on other activities to increase the imports and exports. According to Dave Keller, who did the presentation re the harbour, they are ready to convert to a container harbour. Companies have already shown an interest to visit the harbour to transport containers.

Keller also explained that there is enough storage space for the containers at the Voorbaai Goods Depot 7,24km from the harbour. The containers will be transported by rail and brought back to the harbour in time for the vessels to load them. At present there are already containers that are being shipped to Port Elizabeth in transit to be loaded on international vessels.

Paul Hoffman from SCEP (Southern Cape Economic Partnership) highlighted the growth potential of the different products for the export market. He referred to the recent Garden Route Investment Conference where 49 projects were identified for potential investments.  The Swedish and Chinese delegations that attended the conference subsequent made enquiries with regards to products that could be exported.

He also shared some interesting stats as sourced by Wesgro. In 2015 the total exports from this region were worth R2.6bn with a positive trade balance throughout the years 2006 to 2016. The top destination markets for exports from Eden were the United States, United Kingdom, S, France and Namibia. Top export products were citrus fruit, leather, seeds, fruits and spores, meat, skins and frozen fish.

At present fruit from the Waboomskraal and Langkloof regions are transported to Coega (Port Elizabeth). However, it is envisaged that if it becomes cost effective they would prefer to make use of the George airport. 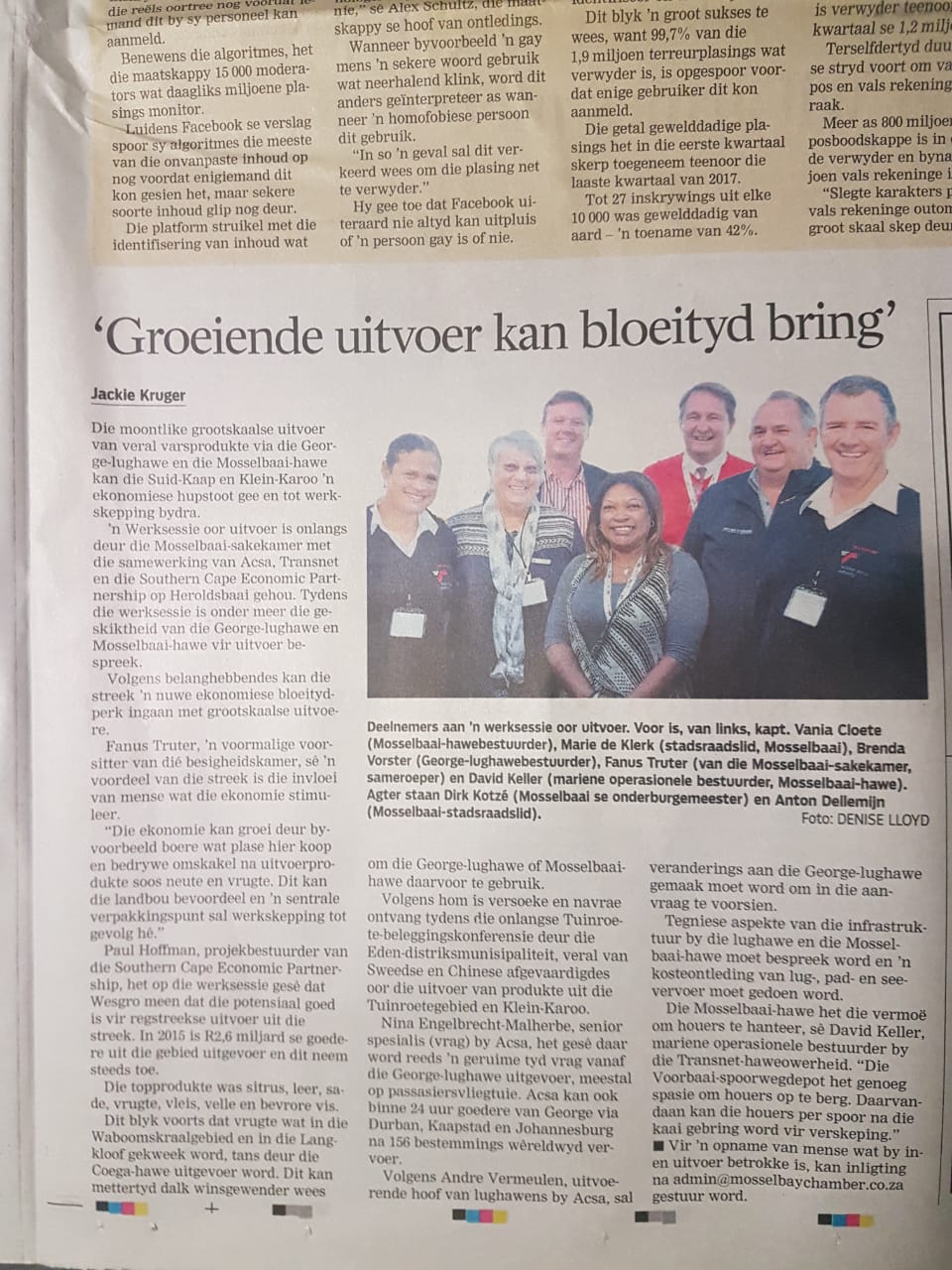